This blog posts deals with the issue of narrative in games and what value the diegesis or story carries in the overall meaning of a game. The main posit of this article is quite an obvious one, that games defining quality lie in their play and that narrative should only ever come second to that. Using the phrase narrative dissonance to describe any moment when the play element of a game and the narrative or diegetic quality of a game come into conflict, Bycer states that

‘As game technology continues to improve, so does the allure of creating games that can stand on par with major motion pictures. But remember that first and foremost, a game has to be interacted by the player.

At the end of the day it doesn’t matter how emotional or developed your story is, as without gameplay, all you have is a movie that requires you to press enter to continue watching.’

Although there are obvious criticisms of this post and indeed some have recently argued for the opposite in games, it is a position that in large part mimics the majority of my own play. With my focus on online games the idea of narrative dissonance is one that resonates often and the result is often a complete dismissal of the diegetic content in favour of the rules and the new reality, storylines and social connections that are made through the context of online play. Is online play and a strong author lead narrative an oxymoron? One of the most interesting examples to answer that question is The Old Republic where famed narrative lead developer Bioware tried to mesh exactly that (the result being the most expensive game ever made and a game that has struggled for a player base since its initial release) and although I don’t have the time to thoroughly carry out a textual analysis of the Bioware behemoth, it does provide a rich case study of the narrative dissonance Bycer describes. 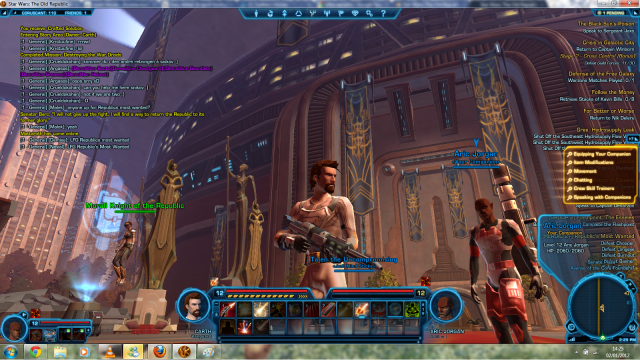 One of the most off-putting qualities about the Old Republic for me (as a previously HUGE fan of the original Knights of the Old Republic games as the screen shot of my character ‘Carth’ displays) was the fact that the richly constructed and unique storylines you followed as a player, with unique party members and individual storylines of epic proportions were the same as everyone else wandering around with their equally unique party members and aims. Unique ceased to exist. The experience of a unique story was one duplicated through the setting of the Old Republic and as a player you are constantly reminded of that as you walk around seeing exact clones of the same ‘unique’ party members you also possess. As far as a conflict of interest goes between massively multiplayer online play and the narrative or attempted construction of a stable diegesis, this is one of the most striking examples of that and it is not alone in the world of online games where often the pre-defined narrative rightly takes a back seat.